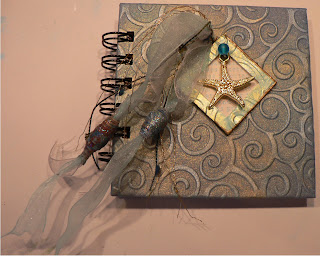 I signed up for a Glitz & Glamor Swap and decided to use some of my new toys er tools and create a blank book.The sparkle doesn't show up well in this photo. 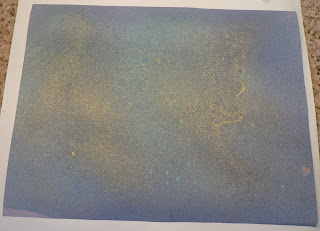 I cut the card stock down to two 5" squares and ran them through the Cuttlebug using the Swirls embossing folder.

I ran a Pearlescent Sky Blue Brilliance Ink pad over the top of the swirls and randomly inked some areas with a Galaxy Gold Brilliance Ink pad. I used these papers to be the outer covers over 4" squares of thin cardboard.

I had some shimmery metallic confetti paper, which I used to make the inside covers and the pages of the book. I stamped a saying on the inside cover with the Pearlescent Sky Blue Brilliance Ink pad.
I had a piece of glossy cardstock that I'd sprayed earlier with the Shimmering Mists and made a small square frame out of that after running it through the same swirl embossing folder. I found a gold star fish embellishment, some pretty ribbons and some glittering paper beads to complete the front. I used my new Zutter to bind the book together, that was very easy to use.
Posted by Carol at 6:08 PM 9 comments:

I took a workshop at my local Scrapbook Store to make a Blessings Flip Book. The covers were made of scalloped edged chipboard and the interior pages were made from adhering two sheets of Brazzil paper together. The colors and supplies were preselected, I liked them because they go with my living room colors . Instead of using it just to hold Thanksgiving memories, I used it to remember some of the beautiful places we've been and the wonders of Gods blessings in my life. I had fun choosing photos I took and using up some of my blessing vellum sheets and rub-ons. I have placed it in the slide show below.

Tagged for 7 weird or random reasons

Hmmmmm, this means someone actually looks at my blog, so I'll take it as a positive thing LOL! Manna at Out of the East tagged me, after leaving a very nice comment on my blog. The game: I'm to list 7 weird or random things about me on my blog; link to the person who tagged me (that one is done), tag 7 random people at the end of the post (how to find 7 random people?!?!?) and let each person know they've been tagged by leaving a comment on their blog. If they are random picks, will they consider this harassment or fun?
Seven random facts about me (you decide if they are weird, to me it's all normal)
Now 7 blogs to tag, here it goes, it will be up to them to decide if they want to play. It's okay if they don't, but these are great blogs to check out for art inspiration:

I signed up to be in a Christmas Recipe Tag Book Swap twice. For one set, I agreed to make the 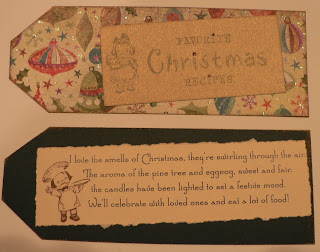 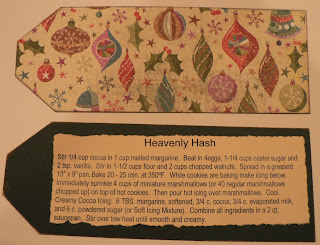 I left the back cover plain, and added a bonus recipe on the flip side.

This is the decorative side of one of my recipe tags

I went back to Olympia to pick up my stencil order and the Shimmering Mists by LuminArte caught my eye. I picked up a bottle of the gold and the silver sprays and one called Guatemalan Green (it looks blue to me). I sprayed the Guatemalan Green and the Gold onto glossy card stock. I was heavy with the spray, so I placed a 2nd sheet of glossy on top and rubbed them together. When I pulled the sheets apart, some of the paper from one sheet tore off on to the first sheet. I thought this made for interesting texture and added some more spray to cover the white areas. Next, I had an odd sheet of periwinkle(?) card stock, I sprayed it with the Guatemalan Green and the Gold Shimmering Mists and again smeared it on another sheet of the same card stock, being careful not to rub to hard. 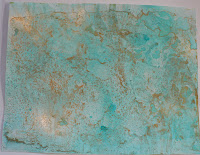 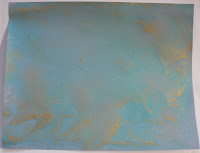 I cut this second background up to use in an upcoming "S" swap I'm in. I stenciled a sun with gold stencil paste onto this shimmery background. Then layered onto a sheet of stenciled swirls that I had highlighted with gold. Placed this on gold paper and a dark blue card. 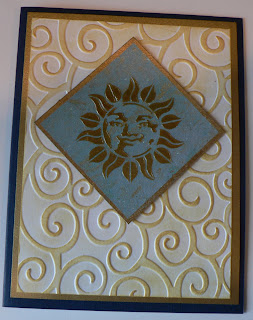 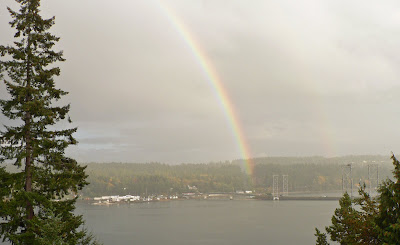 As I was driving home this evening, the skies opened and it began to pour. When I came into the house, the sun started to peek out and I saw this beautiful double rainbow. A good evening to stay inside and work on craft projects.
Posted by Carol at 5:50 PM 1 comment: 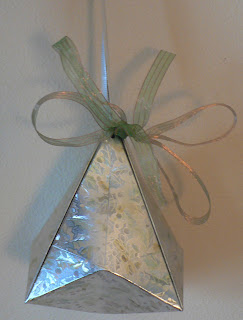 For the 12 days of Christmas Swap, we were instructed to get creative in our gift wrapping. I came up with a fun idea for the smaller set of gifts I had made. I decided to make German Bells and to place the gift inside the bell. These bells can be used as ornaments, or the recipient may take apart the bell and use the paper and ribbon in other projects. I found some silver holographic holly card stock to make my German Bells and matching gift tags. I lightly colored in the leaves with 2 shades of green alcohol inks, then folded the card stock into the bells.
To make the bells, cut a sheet of card stock into a square. Make fold lines as illustrated in the photo with the black lines. The lines that do not go from corner to corner are creased as you would if you were making a paper airplane. (I don't know if there is a special term for that fold). Altogether, there are 12 folds.
The last photo shows which way to crease the folds as you are making the bell. The lines highlighted orange are creased in toward the center of the bell (valley folds). The lines highlighted pink are creased outward (mountain folds). Then punch holes into the 4 points, to tie the ribbon through. 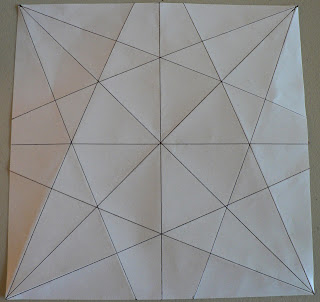 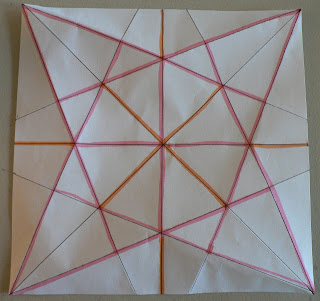 On the Next-Generation-Stampers Group, Trish Bee challenged us to create with gesso and to create with autumn colors. Check out what she has done with the gesso challenge and some other gesso instructions on her technique zone. I was first introduced to textured gesso by Adrienne, she shows some beautiful textured gesso on her site.
I decided to combine the gesso & autumn color challenges with a Nature ATC swap I want to participate in. 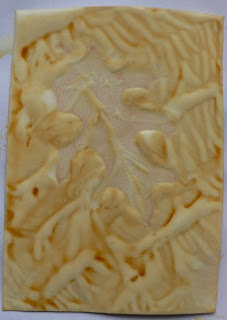 I sprayed card stock with Butterscotch Adirondack Color Wash and then slabbed on gesso, swirling it around to pick up some of the color wash.. While it was still wet, I sprayed on more Butterscotch, then I covered a solid leaf stamp with Versamark and pressed the stamp into the thick wet gesso. I left the stamp in for about 30 seconds. I made sure to clean off the stamp right away, so the gesso wouldn't dry on the stamp. Then I left the gesso to dry and went to work on another project. 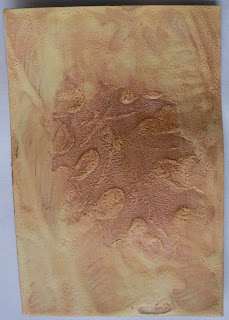 After the gesso dried, I rubbed Lumiere's metallic bronze paint over the surface with my finger, and then wiped it off of the top layer with a "wet one". 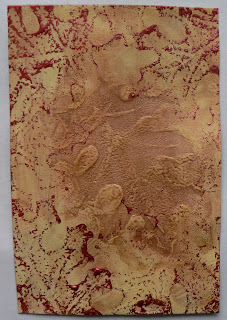 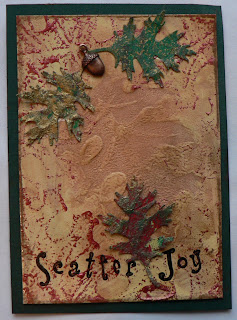 Next, I stamped a skeleton leaf image over the surface with Lumiere's metallic russet paint and let it dry.

To finish the card, I stamped "Scatter Joy" on the bottom, edged the card with bronze ink, and added leaf punch outs and a small acorn charm. This was all mounted on dark green card stock.

Here is directions for how I made the leaf punch outs. Cut out a piece from a paper grocery sack, get it damp and wrinkle it up. 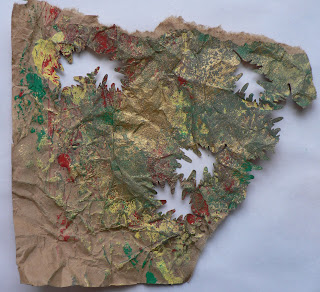 Open and let dry. Paint the surface with yellow, red and green acrylic paints and sponge on gold metallic acrylic paint and let dry. Then I used a leaf punch to get the punch outs. This is a fun technique and is also good for backgrounds.
Posted by Carol at 6:04 PM 2 comments:

The Other Art & Soul

I stopped at Art & Soul, a stamp store in Lacey, Washington on my way home today. I took a fun stencil class. Which was taught by Lynell Harlow of Dreamweaver Stencils. The basic technique was to spray color wash(es) onto the plain side of a metal stencil, lay the stencil wet side up on a paper towel, place a piece of glossy card stock down onto the stencil, hold on one end of the card stock & stencil and with the other hand rub across the back of the card stock away from your first hand, then pull the card stock off the stencil. It was very messy. 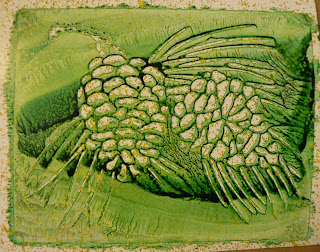 On this pine cone stencil, I first sprayed the glossy card stock with a greenish brown spray and let it dry before doing the technique described above. This was one of the few stencil images where I didn't make a big smeary mess of the image. No worries, as we were given stencil paste to use. 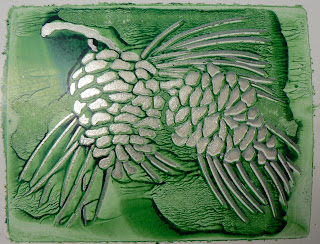 On this one, I had smeared the image quite badly, so I replaced the stencil (as we were taught in class) and covered the pine cone image with pearlescent stencil paste (or maybe it's Trnaslucent, they didn't have any on stock and I ordered a jar. I'll make the correction when my order comes in, and I discover what it's called.) 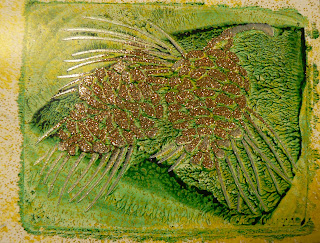 On this one, I used the pearlescent stencil paste, then added gold glitter while the stencil paste was still wet. 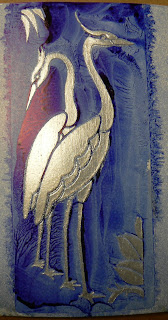 Again, I used the pearlescent stencil paste on this crane image to cover up the smearing I did. 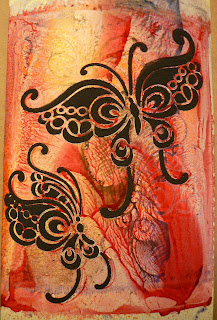 I signed up to be in a 12 Days of Christmas Swap twice. For each sign up, I am to make 12 similar gifts. These can be something I have made from scratch or an altered item, which I'll wrap in holiday style. I send these to the hostess and I'll receive 12 separate handmade items, giving me 12 (24 for the double sign up) gifts to open during the Christmas season. It will be a unique and creative advent count down. I love Christmas time!
For my first sign up, I decided to alter collector albums. These albums hold 40 ATCs.

In my excitement to find these albums on line, I didn't realize they were plastic covered. I tried covering the album with gesso, but it flaked off along the edges.

After consulting with my

Art-Ventures group for suggestions, I covered the albums with gel medium and tissue paper. I wrinkled the tissue paper to give the covers some extra texture.

When this dried, I painted the tissue paper with black acrylic paint,

then covered it with crackle medium and brown acrylic paint.

to soften the look, I then sponged on gold acrylic paint.

Then I added papers and a painted key to finish the albums. 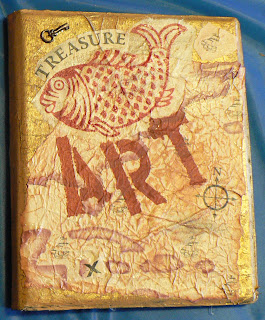 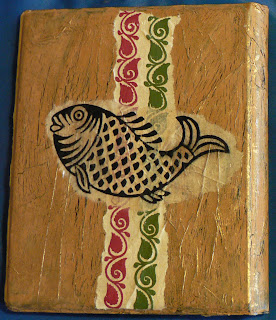 PART TWO - Spoiler Alert Continued (updated Oct.8, 2007)
For my second sign up in the 12 Days of Christmas Swap I made these necklaces. I bought the bamboo tiles from Art Neko. I painted the ends with black alcohol ink. To give the tiles a light golden sheen, I rubbed Luniere's metallic gold paint over the surface. I stamped on the floral image with black Stazon ink. Added thin black ribbon and a bead to finish the necklace. 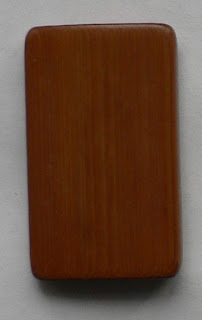 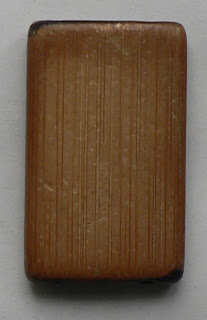 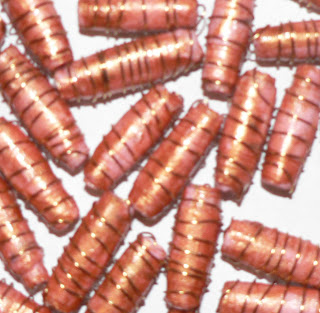 I wanted to make one more set of beads for the bead swap on ccswaps. I used a pink paper shopping bag to cut into long strips. Rolled the paper onto a bamboo skewer with Modge Podge as my adhesive. While the beads were still tacky, I dabbed on bronze Perfect Pearls to add shimmer, then added a couple more layers of Modge Podge to give the beads stability. When the beads were dry, I wrapped gold colored wire around them to add texture.
Posted by Carol at 8:13 PM 2 comments: