After several attempts at beading, that I wasn't happy with today, I came up with a fun idea with no glue involved. Not as messy as yesterday's beading project. I wanted to something metallic after seeing some fantastic art by Autumn Labbe-Reault, and Adrienne Goodenough. I had lots of 2" foil flashing tape left over from working on a technique Tim Holtz did on the Carol Duvall Show a few years ago. I cut the tape into 12" long strips and then cut them in half lengthwise. 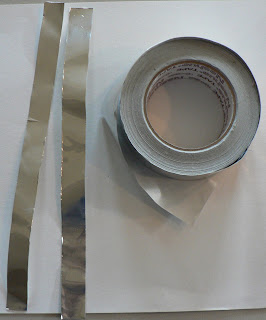 I colored about 2 - 3" of one end of the foil tape with alcohol inks, butterscotch, wild plum & stonewashed. 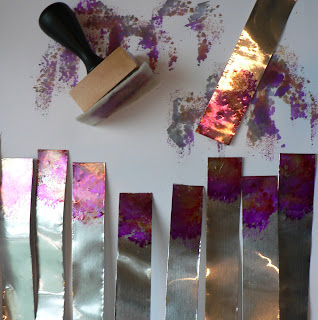 I pulled off just enough of the backing to fold about 1" the non-inked end of the foil tape onto itself. This gave me a non-sticky surface to begin rolling around the bamboo skewer. Then I removed the rest of the backing, while rolling the foil tape on to itself. This foil back tape sticks to itself really well. Before I got to the colored portion of the foil tape, I began creating wrinkles to give the bead some texture. As I finished rolling, the outer surface of the bead was colored and cool looking. 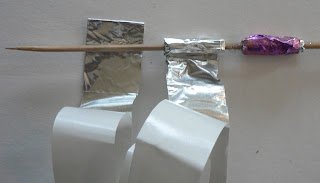 I wanted to put a protective coating on the beads, so they would retain their shape and add some micro beads for add texture and color. I rolled the bead into a pad of clear embossing ink, dipped it into Ultra Think Embossing Enamel (UTEE) and heat set it. I dipped and heat set with UTEE two more times. While the last coat of UTEE was still hot and runny, I dipped the bead into the micro beads and let cool. I found this last step easier to do with the bead at the very end of the skewer. When the beads were cool, I brushed off the excess micro beads. Here is a picture of the finished beads: 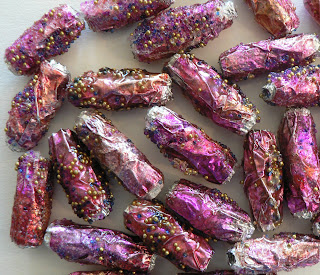 Now I can sign up for a second set of beads in the bead swap on ccswaps.
Posted by Carol at 2:38 PM 3 comments:

I am in a bead swap and had some time to work on these today. I'm doing paper beads, using some paste paper in my stash that I had made a few years ago. I used an old rotary cutter and a quilting ruler and mat to cut the paper into long triangular strips. 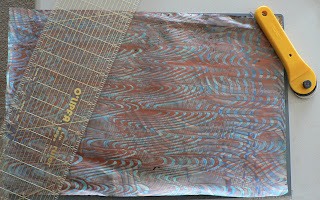 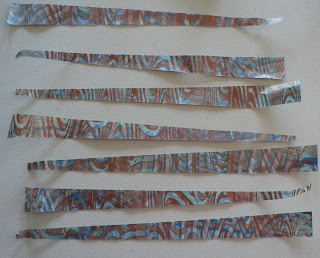 Next, I rolled them, one at a time on a thin bamboo skewer, using JudiKins Diamond Glaze to adhere the paper to itself. I tried rubbing the skewer with olive oil to keep it from sticking, but found the best thing was to remove the glued bead as quickly as possible or it was stuck to the skewer. 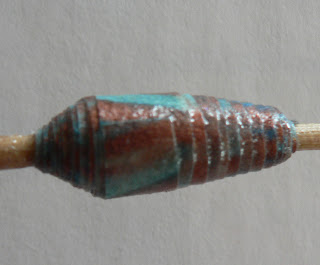 Then I added more Diamond Glaze, rolled the bead in Prisma Glitter and covered with another layer of Diamond Glaze. 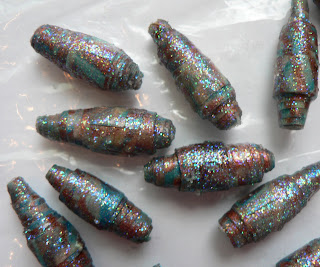 I hope to come up with another idea, so I can sign up a second time. If you want to see some absolutely gorgeous beads and how to make them check out the following sites: Debbie's Beads, Fantasy Beads, Sally A. Niemand Design Studio, being nataha fialkov, A Monthly Rubber Stamps Club, Rubber Road Adventures, Stamper's Mall.

Today came the prompt for the second challenge in this exciting adventure: 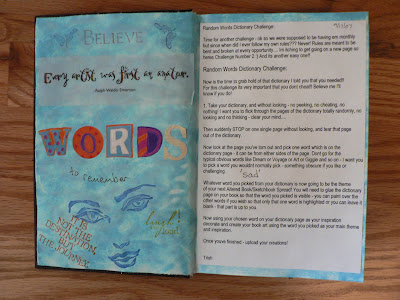 Following instructions, I flipped through an old dictionary and ripped out a page at random. It was the first page of the "S's". I looked for a word that was outside of my usual style and choose "sad". I liked that it was at both the top and bottom of the dictionary page. I looked through my stash of scrapbook papers and found this great paper from Provo Craft, it was in the Stack #3, along with the old postcard and stamp image. I went with a funeral feel, but didn't want to leave it on that sad note (even though sad was the theme of my page). 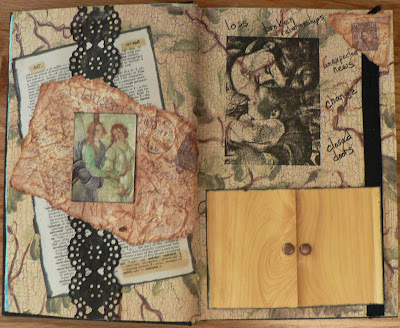 I found this wonderful quote by Helen Keller and placed it, appropriately behind the doors. 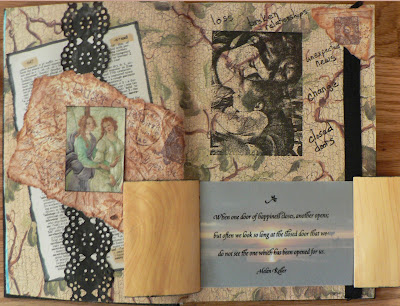 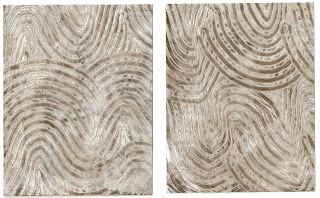 I participated in a background swap this summer, where we each made 12 quarter sheet backgrounds. For my backgrounds I used the textured gesso technique, which are pictured here. I used the technique described by Adrienne, check out her website. I forgot to make some of these for myself. When I returned from my trip this month, I had received 12 different backgrounds in the mail.
I had a difficult time deciding if I should keep the backgrounds I received as samples to refer to or if I should play with them. I decided to cut off an ATC sized piece from each background (2-1/2" x 3-1/2"), write the creators name & instructions on the back, and then turn them into finished ATCs and store them in an ATC album. I now have the samples with instructions turned into my creations, and have more pieces of background to play with. I took pictures of the ATC sized cut backgrounds and what I made with them and put them in a slide show below. A BIG thank you to everyone for their inspiring backgrounds! I had a lot of fun.
Posted by Carol at 9:22 PM 2 comments: 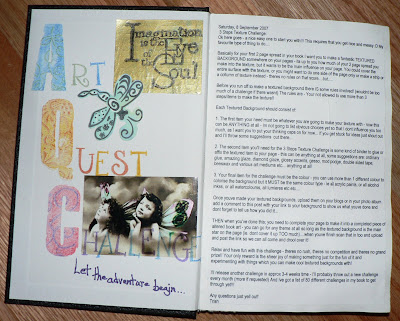 While I was off visiting family in the Midwest, I was invited to take part in the Art Quest Challenge. The original instructions were to buy a journal or book to alter and await further instructions. I went shopping for my journal, but before arriving home the first challenge was given. After being away from my home and supplies for over a week, I was itching to create. I decided to participate with what I could find at my son's house. The three step challenge was to 1. create texture; 2. glue it down; and 3. color with only one medium. Show your work then complete your pages however you desire.
I found some patterned paper towel and used Elmer's glue to attach it to my page. I added color with Crayola Glue Pens. We had recently celebrated 4 Birthdays, including my 2 yr old granddaughter, so I thought the bright glittery colors were very celebratory. 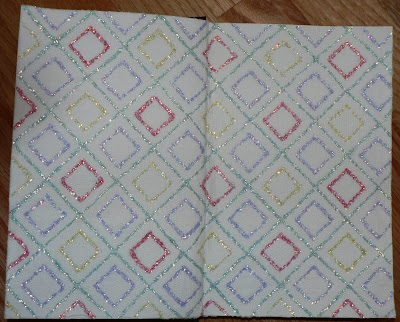 When I looked at my page when I returned home, I was reminded of beginning art in Kindergarten and completed my page in that mode. I'm looking forward to the upcoming challenges! 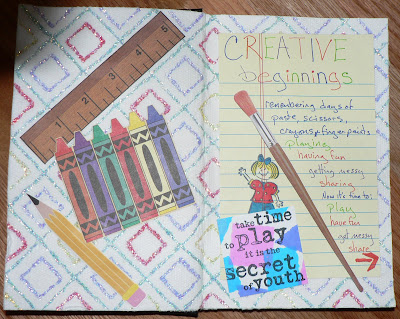